Austin Health has honoured three giants of neurology with the naming of the Bladin Berkovic Comprehensive Epilepsy Program and the Bladin Donnan Acute Stroke Unit.

Associate Professor Piero Perucca, the Director of the Bladin Berkovic Comprehensive Epilepsy Program, said the naming of the Epilepsy Program and Stroke Unit is an acknowledgement of lifetime contributions to epilepsy and stroke made by Prof Peter Bladin AO, Prof Sam Berkovic AC and Prof Geoff Donnan AO.

“Austin Health is incredibly fortunate to have had people of the calibre of Peter, Sam and Geoff leading our epilepsy, stroke and neurology services over such a long period,” Piero said.

“The work they have led and been part of has influenced the way we care for patients not only at the Austin Health, but across the world.

“The re-naming of these services as the Bladin Berkovic Comprehensive Epilepsy Program and the Bladin Donnan Stroke Unit is yet another tribute that highlights the impact they have made in their respective fields.

“I would like to thank and congratulate these three fantastic people for the roles they have played and continue to play to improving the lives of our patients,” he said.

Sadly, Prof Bladin passed away in May but Prof Berkovic, Prof Donnan and Prof Bladin's son, Prof Chris Bladin, were on hand at Austin recently to be part of a special event to mark the re-naming of the Unit and Program.

“The Austin is a special place to me and it feels wonderful to be honoured in this way,” Prof Berkovic said.

“I started here in 1975 and have been lucky enough to be part of some amazing work.

“It’s obviously been tough time through COVID but we will build our research up again and keep pushing the boundaries to improve the care our patients receive.

Congratulations and thank you to Sam, Geoff and Peter! 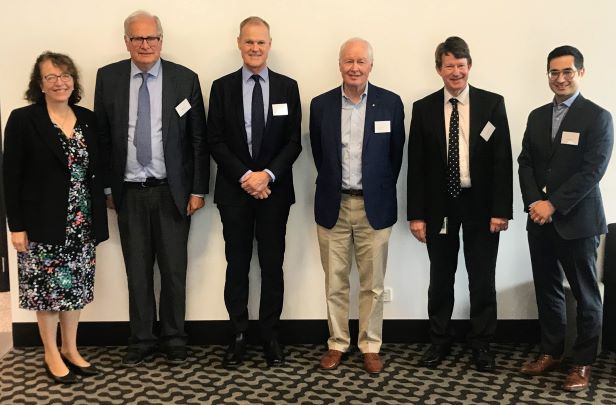 Prof Peter Bladin AO was the first Director of Neurology and the Director of the Comprehensive Epilepsy Program at Austin Health from 1968 to 1992.

He was a dynamic and visionary neurologist who foresaw many of the developments we now accept as part of normal practice.

Peter was passionate about the need to overcome the prejudice that exists towards patients with epilepsy in society and in particular around employment. He implemented a comprehensive epilepsy program to assist patients manage all the implications of a diagnosis or epilepsy rather than just treating seizures.

Peter was the first to introduce multidisciplinary long-term video-EEG monitoring and epilepsy surgery to Australia, starting at the Austin in 1978.

It is through his commitment to improving outcomes for individuals with epilepsy that the program has achieved international recognition.

His dedication to improving the lives of people with epilepsy was recognised by several awards including the Ambassador for Epilepsy Award of the International League Against Epilepsy and International Bureau of Epilepsy.

Prof Sam Berkovic AC, FRS was the Director of the Austin Comprehensive Epilepsy Program from 1992 until 2020.

Sam started as a medical student at Austin Health and has become one of the world’s leading physician-scientists in epilepsy.

He has made an enormous contribution to our understanding of the causes of epilepsy, in particular the genetics of epilepsy. He was involved in the discovery of the first epilepsy gene and many gene since. His work has improved the management and quality of life for people with epilepsy around the world. He holds a personal chair as Laureate Professor at The University of Melbourne in recognition of these achievements.

Sam has received many awards for his scientific contributions including the Ambassador for Epilepsy Award of the International League Against Epilepsy and International Bureau of Epilepsy (2005), election as a Fellow of the Royal Society (2007), and the Prime Minister’s Award for Science (2014, jointly with Laureate Prof Ingrid Scheffer).

Prof Geoff Donnan AO was the Director of Neurology at Austin Health from 1993 – 2008.

He was a pioneer of modern treatments for stroke. His vision was to dissolve or remove the blood clot causing the stroke, restoring the blood supply and reducing the stroke severity.

In partnership with Prof Stephen Davis from the Royal Melbourne Hospital, Geoff was instrumental in developing thrombolysis and clot retrieval in Australia. This strategy was also adopted successfully in other countries and is not the standard of care for stroke.

His work is internationally recognised and he is a past President of the World Stroke Organisation.

In addition to his academic achievements, Prof Donnan has always had a strong commitment to improving patient care across Neurology.

The Geoff Donnan Award is presented in recognition of the legacy he left at the Austin when appointed Director of The Florey Institute of Neuroscience and Mental Health in 2008.