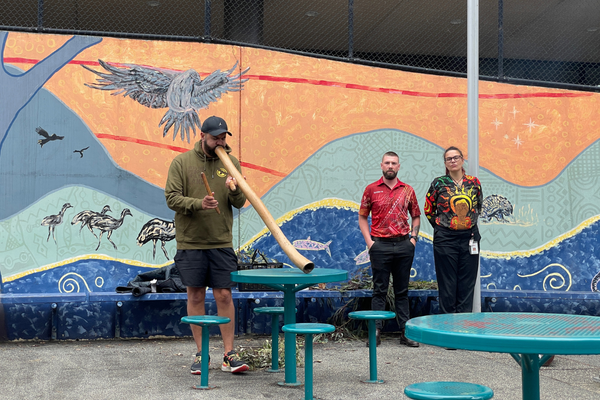 In December 2022, the Ngarra Jarra Aboriginal Health Unit at Austin Health hosted a Smoking Ceremony to pay respects to Uncle Archie Roach. Staff were warmly invited to take part in the ceremony to remember his life and ongoing legacy.

“Hospitals would normally lower the flag to half-mast as a sign of mourning, but we decided to turn it into something more meaningful,” says Ceara Larkins, Aboriginal Liaison Officer.

This however wasn’t the first time a smoking ceremony has been performed at Austin Health. In 2020, Austin Health was the first hospital in Victoria to hold a Smoking Ceremony for a patient.

“We are pushing for smoking ceremonies to occur more frequently and increase staff education. Patients are opting to be transferred to Austin Health just to have access to this service,” Ceara adds.

The Ngarra Jarra team has created a Smoking Ceremony and Sorry Business policy to better educate staff and increase awareness of this service. The policy includes purpose, cultural consideration, locations and procedure.

Austin Health is the first Victorian hospital to implement these internal guidelines, which are in place to not only ensure that Aboriginal culture and traditions are upheld and performed with respect, but to encourage and ingrain cultural practices into the every day life of the hospital.

“We want to bring the Aboriginal culture through the whole health system,” says Ceara.

What is a Smoking Ceremony?

A smoking ceremony is an ancient custom among Aboriginal tribes that involves smouldering various native plants to produce smoking which has cleansing properties and the ability to ward off bad spirits. It’s a tradition that has been performed by Aboriginal people for centuries, and is one of the oldest ceremonies practiced in the world today.

Smoking ceremonies can be used for a number of purposes including healing, spiritual renewal and strengthening, birth and Sorry business (one passing away). It can also be used to cleanse objects and items that have crossed cultural borders.

The Ngarra Jarra team has its own Coolamon (a shallow vessel made from scarred trees) which is specifically used for Smoking Ceremonies.

Smoking ceremonies can be requested by both Indigenous and non-Indigenous people.

Given the significant nature of the ceremony, it is only performed where Aboriginal and Torres Strait Islander people determine, and consideration needs to be taken into the timing.

To find out more about smoking ceremonies, or to request this service, please contact the Ngarra Jarra Aboriginal Health Unit on 9469 5699.