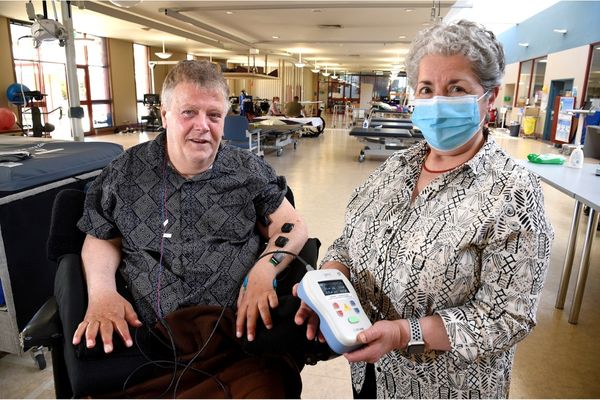 PEOPLE who have lost the use of their hands and arms through spinal cord injuries may recover some movement using a device that “re-excites” the nervous system.

In a trial led by Austin Health and the University of Melbourne, researchers are investigating if a non-invasive method called transcutaneous electrical spinal cord neuromodulation (TESCoN) is safe and effective.

It uses a hand-held device with electrodes placed externally on the skin at the back of the neck to enable stimulation of the spinal cord using an electric current. In just a week the method has already produced movements in the first Victorian trial participant, Brad Connelly, 60, who broke his neck 25 years ago in a surfing accident.

Lead researcher Mary Galea, of the University of Melbourne, says this is Australia’s first trial of TESCoN with patients who have tetraplegia (loss of use of arms and legs).

While the trial is in its early stages, Professor Galea says it shows potential.

“To be able to give someone the opportunity to regain some movement is a really great thing and it will be wonderful if that is the outcome of the trial,” Prof Galea said.

There is no cure for spinal cord injury, but Professor Galea says this study addresses a significant unmet need – the recovery of some hand and arm function.

The Victorian trial has funding through the Medical Research Future Fund and in the next five years will recruit 80 participants: patients with complete and incomplete spinal injuries with long-term or more recent injuries.

Patients will have combined treatment of TESCoN and intensive rehabilitation five days a week for four weeks, with follow-up at three months.

“This is not about being able to gain full movement of the arms, it is about uncovering dormant movements with the stimulation and working on those movements with extensive therapy,” Professor Galea said.

“TESCoN targets spinal cord pathways that have been spared from the original injury but are not working normally.

“It raises the excitability of spinal networks so that the spinal circuitry below the level of injury requires smaller levels of excitation to start working. Movements can then be generated more easily.

The devastating impact of his injuries meant for 25 years he has only been able to move his head.

He and wife Pam, 54, say since he started the trial in October “something is definitely happening” with his left arm.

“We saw so much improvement in the first week of the trial,” Mrs Connelly said.

“After one month he has some very small, controlled movement that we have never seen in 25 years. It is just amazing, the hope this has given us.