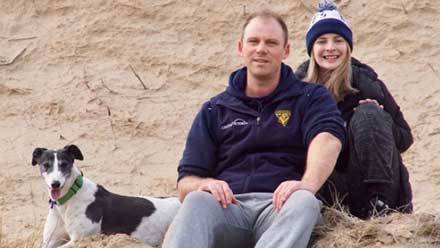 Dave was at work teaching at the local primary school, and Nicole was home alone with their dog Lassy.

Nicole was 22 weeks pregnant with their first child, a baby boy they’d decided to name Ned.

Suddenly Nicole had trouble with her vision and speaking. She called her parents for help and they called an ambulance.

“Two ambulances rushed to our place and broke down a door to get to her. They then rushed her to Austin Hospital for emergency surgery,” Dave said.

Director of Neurosurgery, Augusto Gonzalvo was one of Nicole’s surgeons.

“Nicole had a brain haemorrhage and while she was unconscious, she aspirated her vomit. Her lungs were not in a good state and this meant poor oxygenation.”

“The first operation we did was the evacuation of the clot from her cerebellum in order to reduce the pressure inside her head. However, we had to abandon the operation halfway because of her poor lung function.

“The thoracic surgery team came along and ‘washed her lungs’ in order to improve it. We then transferred Nicole to the CT scanner to check what we’d achieved with the operation and decide if further cranial surgery was needed. There was approximately 30% of the clot left behind but we decided that it was ‘good enough’.

“We took her back to the operating theatre to place a drain in her head in order to monitor her intracranial pressure and connect her to the ECMO system to help with her blood oxygenation,” Augusto said.

“This team of highly trained people was assembled without any notice and highlights the role of public hospitals in looking after our community in critical situations,” Augusto said. 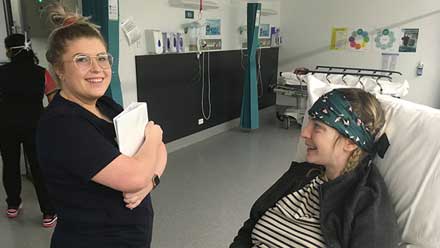 Neurosurgery nurse Briana and Nicole have a special connection

“First time I saw Nicole, was when I brought Ned in and laid him on her stomach. She was hooked up to so many things and was in a coma," Dave said.

“The team at Mercy did an incredible job, they supported us and gave me, Nicole and our families the opportunity to meet and say goodbye to our precious little boy Ned,” he said.

“After 32-hours without any sleep in this little room outside ICU, a nurse named Zoe Nicholas got us blankets and pillow and made tea. She was one of Nicole’s nurses, and is one of the most caring people I’ve met. She was so gentle and delicate when tending to Nicole, all while having to work around distraught family members. We’re so grateful for her kindness and the way she looked after my wife,” Dave said.

After a few weeks in ICU, Nicole was out of the coma and miraculously no longer needed ECMO. She was then transferred to Neurosurgery Ward 6 West.

Nicole survived, but her journey of recovery had just begun.

“There’s not much I remember about the day I got sick or my time in ICU, but my husband Dave often tells me about the incredible staff who looked after me, he calls them angels,” Nicole said.

After Nicole’s time in ICU, she was transferred to Neurosurgery Ward 6 West.

“The team on 6 West went above and beyond for me.”

“They even surprised me with a visit from my dog Lassy before my second brain surgery.

“Because of coronavirus, Lassy wasn’t able to come onto the ward, but they arranged to have Lassy meet me outside the Austin Health tower. This was so incredibly touching,” Nicole said.

What also stood out to Nicole was the incredible support both her and Dave received from 6 West Nurse Briana Wigginton.

“She was there for us and helped us through some pretty difficult conversations around the risks of my second brain surgery and what could happen in the worst-case scenario.

“This was very confronting, but Briana really helped us through this tough time,” Nicole said.

On Nicole’s birthday in April, Pastoral Care staff from Austin Health and Mercy Hospital for Women arranged for Nicole and Dave to spend some time with Ned.

“The staff were so kind and compassionate, and we thank them for giving us this opportunity to spend time with him,” Nicole said.

When Nicole left 6 West the staff made a guard of honour and sent her off with a standing ovation.

“I rarely cry, but this brought me to tears,” Nicole said. 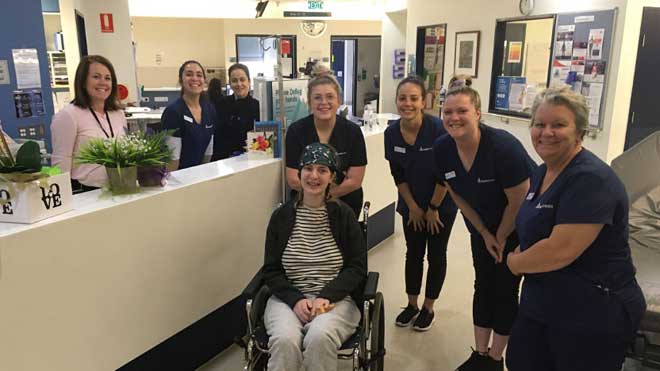 Staff on Ward 6 West make a guard of honour to farewell Nicole.

“I’ve had speech, OT and physio every day. This has been incredible for me and has made such a difference with my recovery.

“Everyone who runs therapy has been extremely kind and caring and has been there for me in ways that I cannot describe, I have really liked everyone who has worked with me. I am very grateful.”

Nicole recently took 45 unassisted steps, which was her personal best. She has now gone on to take 210 unassisted steps and is able to use a 4-wheel walker to get around on her own. The wounds on her head from her surgeries have also healed.

“I’m getting there,” Nicole said.

One of Nicole’s greatest supports throughout this journey has been her husband Dave.

“Before the changes to the visitor policy, Dave was here every single day visiting me and I could not be luckier.”

“Sometimes he would bring the dog and we’d eat outside. Sometimes I forget where I actually am. I love that he treats me as if we were at home,” she said.

“There are so many people I’d love to thank for helping me along the way.”

If you or a loved one has experienced stillbirth, newborn loss, or pregnancy loss and would like some support you can contact SANDS Australia on 1300 072 637.