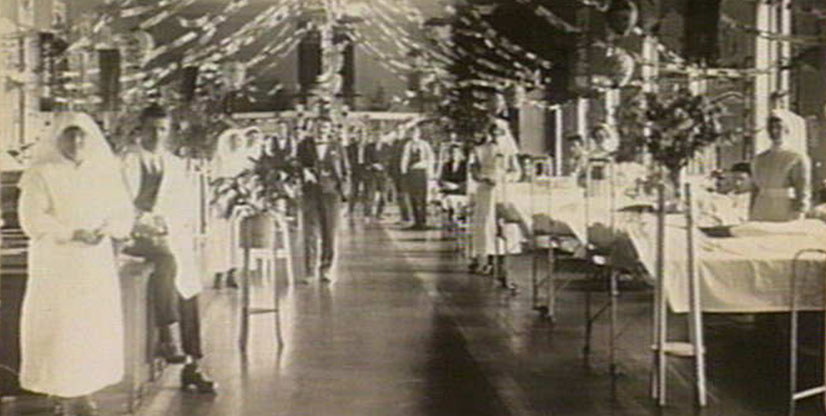 The ghosts that roam our hospitals

Many have walked the wards of our hospitals before us.

This Halloween we share a series of short stories on the urban legend of the grey nurse.

Over the years, she’s been sighted wearing a grey nurse’s uniform from a bygone era. She’s a dedicated nurse who decided to stay on shift long after she left the earthly realm.

The grey nurse is a friendly ghost who attends to patients and performs good deeds such as pressing the call buzzer for patients who can’t.

Here are some unexplained occurrences, as told by our nursing staff.

30 years ago our now Divisional Director Cancer and Neurosciences Cherie Cheshire was working night shift on the Neurology ward in the 3KZ building at Austin Hospital.

“We were supposed to be three nurses on night shift, but we were short staffed and only had two.

One patient named Carol had complete paralysis due to MS. She could not take a drink of water herself however suffered from terrible dry mouth. So, the nursing staff attended to her at least hourly to help her sip some water, even overnight.

On this shift we were flat out. At around 9.30pm I filled Carol’s one litre jug with iced water and gave her a drink. It then got very busy and I didn't manage to go back to her room until midnight.

When I did, she only had half a jug of water. She told me the other nurse had been in several times and helped her drink. I knew this wasn't right however checked with the other nurse who said she had not been in the room. When I asked Carol about who helped her with her water again, she said it was the older agency nurse in the old-fashioned grey dress…”

Former Director of Nursing at Royal Talbot Rehabilitation Hospital and former Austin Hospital ICU Nurse Unit Manager Jen Hancock had her own experience with the grey nurse back in 1977.

“While working nights on the old 6A in Heidelberg House, the buzzer rang and a lady needed a pan. I took it to her and asked her to buzz when finished.

Ten minutes later, there was no buzz, so l went to check. She was lying down in bed half asleep, curtains pulled back.

She told me that the other nurse in the grey uniform with a veil had taken it and made her comfortable. I was working with a male Enrolled Nurse. I asked the Registered Nurse who was between the three wards in Heidelberg House, if she knew anyone in a different uniform. She didn't.

I was later told it was a common occurrence in Heidelberg House and that patients had often described the grey nurse.”

Nurse Unit Manager of Ward 6 East Neurology Karyn Owen says that she experienced unexplained occurrences when she worked in the Harold Stokes Building at Austin Hospital.

“When heading up the dark corridor in the Harold Stokes Building on Ward 7B, there was always a distinct cold feeling when I’d go to beds 1 and 2. Often, the Intravenous Therapy (IVT) or Nasogastric feeding pumps (NGT) would alarm and by the time I reached them, they would be silenced and re-set, without anyone having been there. We often commented that is must have been the grey nurse!”

Service Planning Project Officer, Kate Ireland never saw the grey nurse herself, but says she heard many stories while working as a nurse at Heidelberg Repatriation Hospital.

“I first heard about the grey nurse many years ago when I was a graduate nurse, working night duty for the first time on Ward 3 at Repat. As she only seemed to appear at night, the night duty staff shared their stories about their experiences with her.

The grey nurse seemed to be very kind, putting blankets on patients when they were cold, helping them have a drink of water when they couldn't do it themselves, and even putting patients on a bedpan when the other nurses were busy.

While most of the grey nurse’s work was not witnessed, I remember the night duty nurses saying that they had occasionally caught glimpses of her. The wards in the Centaur wing had long corridors that were quite dark at night, and she had been seen down the end of the ward corridor before she turned a corner. Of course, when they went to look, there was never anybody there."

Austin Health has a long history of exceptional, caring and dedicated nurses.

If you’re a current or former Austin Health nurse, you can join our Nursing Alumni and share stories like these and more with a community of former and current nurses.